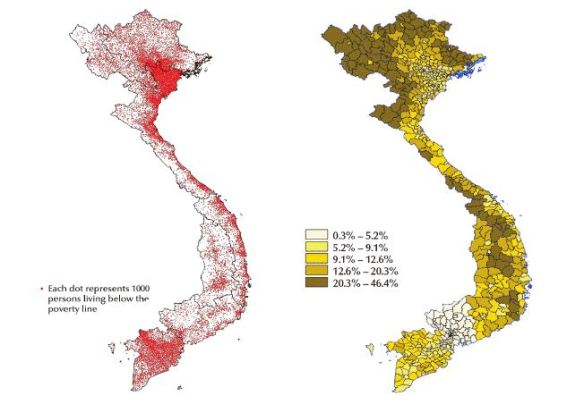 This is another rather incredible initiative undertaken in Vietnam which relates to Urban Information Modelling. Interestingly, this study looks at poverty levels not only on the urban scale but also on the regional and national scale. The article written about the modelling process is extremely interesting since much of the problems the developers of the program faced are similar to our own problems with formatting data.

For example, the article describes that the team originally had to account for regional differences in the data by adopting seventeen household characteristics which appeared in the earlier census data and then extrapolating them across the country. Trying to compare urban and rural populations, however, became problematic. According to the article:

“The team considered that this use of only two consumption models, one rural and one urban, for the whole country was somewhat unsatisfactory; it seems unlikely that returns to each of the rural (or urban) household characteristics would be the same across the entire country. As an alternative, the regression models included dummy variables for each of the regions to account for regional differences.” Through the inclusion of the dummy variable, however, much of the data ended up showing unrealistically large differences across the borders of two regions.

Another extrapolation made by the developers was necessary when raw data from the most recent census polls was unavailable to the public. As a result, the researchers could only purchase three-percent of similar data generated by the GSO (General Statistics Office)  and extrapolate the data across the country based upon geography and income levels as a proportion of that small percentage of data. As more and more organizations grew interested in refining their data, the developers were only able allowed to purchase thirty-three percent of the data in order to show the regional differences on a much finer level.

Apart from the technique, the mapping revealed newfound estimates of poverty headcounts for provinces, districts, and communes. “The maps provide a striking visual account of the depth of poverty in the mountains to the north, the upland areas along the coast, and the Central Highlands. They show much lower levels of poverty in the Southeast (where Ho Chi Minh City is located), other lowland areas, the Mekong River Delta, and the Red River Delta.” Though to anyone familiar with the geography of Vietnam or the war in Vietnam this is not incredibly uprising, the maps suggest that there is a strong correlation between poverty and geography rather than geography and administrative boundaries (a reversal of the antiquated, wartime viewpoint).

Lastly, the map representing poverty headcounts for provinces, districts, and communes revealed the heterogeneity within provinces in many parts of the country. “Many rich provinces have several poor districts, while the reverse is true for several poor provinces. By extension, many richer districts include a large number of poor communes.” Another map which shows the poverty density across Vietnam reveals that poverty is not high in areas of greater poverty density.

Anyway, the map has an interesting narrative regarding the mapping process: https://docs.google.com/viewer?a=v&q=cache:VLjmhReZMxkJ:siteresources.worldbank.org/INTPGI/Resources/342674-1092157888460/493860-1192739384563/10412-14_p261-286.pdf+mapping+poverty+vietnam&hl=en&gl=us&pid=bl&srcid=ADGEESiSMdXvMSMXGTHgANDuetBnMBPPLy6eHUDZ303RyB4XrOhjT91490fUdy4_c7WhnLejkcOwE0udH63bBQ4zcxYPC7itr22D3FS_2DGenAW8DL2AMny_uyZDdLNCfF-QyHCQ5mAs&sig=AHIEtbQENFbE06lzvNcpBxnXKMbdZFfJ1Q

I thought I would do a few Vietnam-related UIM pieces since I’m writing a paper this weekend on the War in Vietnam. This was an interesting article I found about air quality mapping in Ho Chi Minh City (formerly Hanoi) in North Vietnam. According to the article, the air quality is becoming poor due to a re-surging population. The population is expected to increase by 1.5-2 million by 2020 with an 11.2% rise in the economy. Interestingly, the use of cars in Hanoi grew by a factor of 30 from 1995 to 2005, leading to intensely dense, particulate matter suspended within the air.

Clearly, accurate information on the status of air quality is an essential component of Hanoi’s future, as well as for formulating action plans. The monitoring of air quality in Hanoi started in the early 1990s. Interestingly, the investment in air quality monitoring networks in Hanoi has increased far beyond average national levels; seven of the twenty automated Air Quality Monitoring sub-stations (15 stationary and 5 mobile) in Vietnam are located in Hanoi.

The study integrates a variety of graphic devices to analyze air quality. It includes maps which show the highest concentrations of particulate matter in the city parlayed with maps of traffic congestion, air quality cross-referenced with prevailing wind patterns, as well as maps which compare air quality with those of surrounding Asian cities. Other maps are based off of the following studies:

The article also comments upon some of the challenges faced by the project in terms of project coordinators regarding public outreach and graphic display:

“In Hanoi , the participation of public on AQM related activities is also limited at this point. The online information from monitoring stations was designed to be disseminated through mass media such as newspaper, radio, television, and internet. However, at present, the operation of electronic information boards on displaying real time pollutants levels at DONREH and Department of Transportation is very sporadic and unreliable. Among all the agencies conducting air quality monitoring, the network of stations run by MONRE is most synchronized since 2002 (updating hourly data from the stations to the database center in Hanoi).”

To read Ngo Tho Hung’s PHD thesis on AQM in Hanoi, go to: http://www2.dmu.dk/pub/PhD_Hung.pdf

For a more concise article, go to: http://www.urbanemissions.info/model-tools/sim-air/hanoi-vietnam.html